By Danny Kwon — A few years back, I met up with an old friend I hadn’t seen in years at a conference on the other side of the world. After a long day of meetings and sitting all day, we agreed to meet in the lobby of the hotel after dinner to go for a walk around the neighborhood to catch up and to get some exercise as well. We met on time and proceeded to go for a nice, brisk, approximately 4-mile hike around the hotel. When we were almost back to the hotel, my friend looked at his Fitbit watch and stated that he was going to keep walking since he was close to 10,000 steps for the day and needed a few hundred more steps. He explained that ever since he got his step counting watch as a gift, he’d been doing 10,000 steps per day for over a month now.

Since then, I’ve noticed that the 10,000 step figure is a standard goal for daily steps for many people. But it’s not always easy to get that many steps in a day. And where did this figure of 10,000 steps come from anyway? Is that the optimal or minimum level of walking for good health? Can I get away with walking less? A recent Harvard study found that just 4,400 steps per day reduced the risk of premature mortality in women by a whopping 41%.

Here’s an excerpt from WebMD of an interview with the study lead Dr. I-Min Lee.

Were you surprised by the results of your study?

Lee: Yes and no. Previous studies have shown that when it comes to physical activity, “some is good, more is better,” but there’s little data on steps and health, particularly long-term health outcomes. I knew this was a critical gap in knowledge, since so many people monitor their step counts. But 4,400 steps per day is a very modest number of steps.

Where did the more well-known goal of 10,000 steps per day come from?

Lee: It likely originated as a marketing tool. In 1965, the Yamasa Clock and Instrument Company in Japan sold a pedometer called “Manpo-kei,” [which roughly translates to] “ten thousand steps meter” in Japanese. But, for many older people especially, 10,000 steps per day can be a very daunting goal. That’s why we wanted to investigate whether this number was necessary to lower mortality rates.

Lee: If you can get to 10,000 steps per day, that’s fantastic, and I certainly would not dissuade you from that goal. For those who are inactive, though, that might not be achievable. Most people average 2,500 steps per day just doing normal activities, like going to the bathroom, walking around the office and getting the mail, so adding 2,000 steps per day more to your usual routine is very doable. Just move more. Even a modest number of steps is associated with lower mortality. You don’t need to go walk for miles or hit the gym. The extra 2,000 steps (which is about one mile) can be accumulated throughout the day. Once you get into the habit of not sitting around so much, you’ll be surprised by how easy it is to get the extra steps.

So here are 5 ideas to get more steps per day.

–Danny Kwon is the executive director of Life and Health Network based out of California; photo by pixabay.

This article was originally published on the Life and Health Network webpage.

By Rick Mautz — Denver, Colorado … The Rocky Mountain Lifestyle Center is here to serve you, by providing reliable health information and ongoing support as you begin your journey toward better health.

One of our major trusted sources is the American College of Lifestyle Medicine (ACLM). Since most of us are thinking about how we can have the most effective immune system. I would like to start with that, realizing that the steps you take to improve your immunity will also help with most other aspects of your health.

To make it easy, here is a handout by the ACLM that illustrates each point.  Pick just one to start with, I suggest starting with the easiest one for you.  Then add another each week, until you are able to do them all regularly.  (if it takes longer than a week for some of these steps, don’t worry, it is better to go slow and develop strong healthy habits that will last a lifetime than to try too much at once and fail.

You can expect more helpful information as we continue to develop this website.  And if you need personal support, feel free to call the Lifestyle center to connect with one of our Health Partners at 303-282-3676. 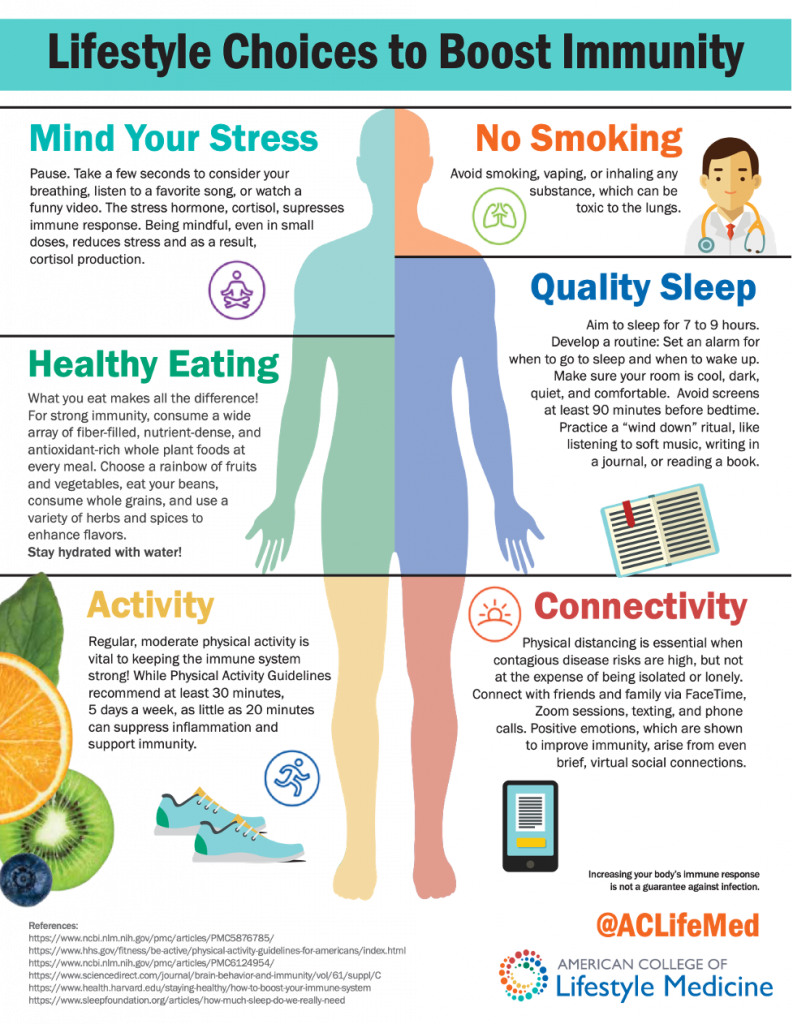